As many of you will know I’ve been spending some of my crucial physio’ time learning Tai Chi for the past couple of years. I’m still going, that’s not the news, no change there. Although, news-wise, I’ve just learnt the final moves to the Sun Style 73 form, and I’m also learning the Yang Style Sword 16 form. Wheeeeee! Love it!

My teacher and her business partner have various martial arts classes taught at their club, not just Tai Chi. Of course most martial arts are fast and waaaay beyond me in terms of fitness and health requirements. Classes include Kickboxing, Muay Thai and Mixed Martial Arts.

But a while ago they started a new class which massively overlaps with Tai Chi. It’s not focused on fitness, but instead on technical aspects. It’s a mix of Chinese Boxing with Kung Fu. After some discussion with my teacher I decided to give it a whirl! *gasp* Which basically means that I get to apply my Tai Chi knowledge, learn some new moves, feel safer for knowing some self defence and it allows me to push my physio’ within a safe environment.

Many years ago the first physiotherapist I saw at a hospital told me that I should be able to do anything within my physio’ time even if my pain levels then go up and I keel over later. Of course that was also the physiotherapist who decided by herself that my diagnosis from the national specialists was not actually true, so she worked on the assumption that I had a common or garden type of chronic pain rather than the multi-systemic reality of CRPS. *sigh* Don’t worry, her boss knew the score and I worked around her! But as I’ve worked at the physio’ pacing over the years I have found that I can do more during my physio’s on less symptomatic days as long as I stick very carefully to the time limit. I inevitably experience greater pain and symptoms post-physio’, but if I am consistent and don’t push it too much this actually helps to keep my pain levels from soaring as high as it used to overall. (Which, for a CRPSer, is pretty good)! As long as I spend the rest of the day resting and recuperating (which I have to after any physio’s anyway). Being trapped on the sofa on painkillers is my reality whatever activity I do during my physio’ time, so a fulfilling physio’ helps me cope with the recuperation time.

It helps enormously that my teacher has worked with me in Tai Chi for a couple of years… she knows me well enough to know that I push myself too hard sometimes and so she reels me in a bit! She also is pretty good at spotting when I’m having a symptomatic day, and knows when not to pick me up on certain types of errors because they’ll iron themselves out when I’m feeling better. Although she does not know lots about the complex condition (I mean, it’s not like it’s a ‘common knowledge’ kinda condition!) she has taken on board all sorts of information about the kind of problems I’m trying to work around. Yep. Basically she is a Superhero teacher!

So I’ve been attending these Kung Fu lessons once a week and learning how to deal with things like someone grabbing my arm or my top (handy arm locks with minimal effort), how to apply the kind of moves I’d previously only learnt in slow mo’ (like sweeping someone out of the way with minimal effort), and different kinds of blocks and responses to someone moving in to throw a punch or a kick (in slow mo’ because I can’t react to it fast yet 😉 ).

Kung Fu is all about technique and it’s defence-based. So moves begin with a block and then respond in very straight forward ways to use the attacker’s move against themselves. It’s about the quickest ways to relieve yourself of your attacker so that you can exit the scene safely. My teacher is used to working around students with injuries and/or health limitations, so I really thank my lucky stars that I flukily ended up in her class at the gym as it turns out that it was the beginning of a journey I could never have guessed at the time. 🙂

I guess you may have heard of the phrase “once in a blue moon”? Well, yesterday there really was a blue moon (four full moons instead of three during this quarter of the year) and one of those ‘once in a blue moon’ things really has occurred…..

I have been awarded a white sash in Kung Fu! 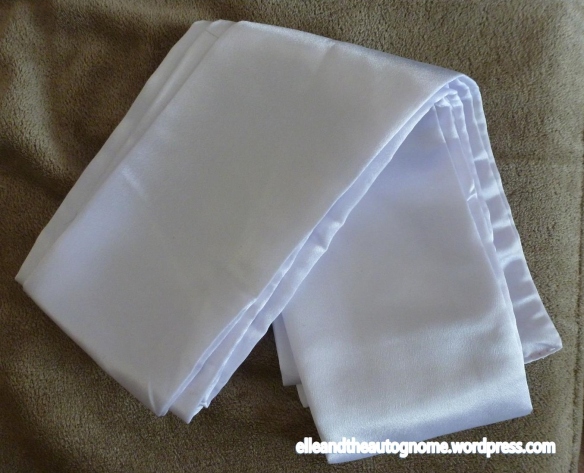 Although I have been considered a bit special for a while as I’ve found it really hard to think fast after the controlled Tai Chi forms, I am hoping that if I slowly practice the moves during physio’ time that I may continue to improve.

It makes no difference to my condition other than a different type of physio’, and it makes little difference to my disability except that I am experiencing a bit more fallout pain-wise (but that’s for me to deal with, my inability to function the rest of the day is no different to usual in practical terms). It does, however, make me feel less vulnerable, allows me to feel more confident, to meet more people, to add to my Tai Chi with greater knowledge of how the moves are used in applications, to feel proud of trying something new and (hopefully 😉 ) progressing, to give me new goals to work towards, to share something martial arty with my boyfriend (because his Kickboxing classes are for crazily fit people only!). It is adding value to me and my life and that’s what is important. I also have a background hope that it will help to build a little muscle to reduce the partial dislocations, too (<crosses fingers>)!

I am very happy to have earned this sash. If I didn’t know better I would think they were being kind to me, but I do know better – they make sure that everyone is up to standard and then some. So I guess I must’ve actually earned that sash. I wonder if I can earn the next one? It might take me a while…. there isn’t another ‘blue moon’ until 2015! 😉

Oh yes, and on other news…. I’m on the Tai Chi team for the club. Bring on next year’s nationals! Who says a chronically ill disabled girl can’t compete for four minutes at a time and win some medals?! hehe 😀