During the time that I was away from the blog creating the FAQ I still kept up with my physio’ sessions of course. I have to as the pain still needs managing no matter what else is happening. In fact that has to come first for me to be able to do anything else anyway. So I kept up with the Tai Chi and was training for this year’s nationals in Oxford and London.

I also kept up with the adaptive Kung Fu taught by the same fabulously supportive teacher.

So I’ve had a few progressions to celebrate since I last posted about these physio’ focuses.

I sourced my very own purple, (yes I’m sticking with the purple!) Tai Chi ‘silks’ and when they arrived I was so chuffed to have my own set that I wanted to take a piccy of them to show you. On the very same day though I was awarded my green sash in adaptive Kung Fu so I was pretty overwhelmingly happy and took a photo’ of the two together… 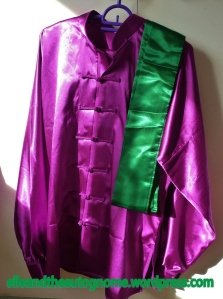 Each time the Tai Chi tournaments come around there’s something new about our performances. There is always additional detail and improvements which we’ve spent the last year working on, but this was also my first year competing at intermediate level (for those who’ve been learning Tai Chi for 2-5 years). I was bowled over to win a gold for my performance at each tournament again this year, plus there was the added surprise of being awarded joint bronze at London for overall intermediate as well. So yep, I’m pretty amazed at the outcomes, especially the London one because a) I had performed the 24 form at Oxford and only started learning the 42 form 8 weeks before London, and b) I had to wait all day before it was time for me to perform… by which time I was a mess! My brain was going, my Dysautonomia was playing up, I couldn’t think straight and basically felt downright dreadful. So I decided that if I managed to get through it without making any massive errors or falling over that I’d be happy. After all, I don’t so much compete with my Tai Chi peers as with my health. If I can kick the metaphorical arses of CRPS & Dysautonomia then I’m a happy bunny! So yeah, winning in that state was one heck of a shock! Maybe I’m alright at this Tai Chi thing! 😉

I know that it would be appropriate to have a piccy of me after performing at London as I collapsed in a sweaty heap the moment it was safe to do so, drank a bottle of water in one long gulping session, shovelled down some salty peanuts and then just sat there cross-legged with my head in my hands. Funnily enough poor Magic Dude was more concerned about me than he was about documenting the state I was in, we’ll make sure he gets his priorities right next time! 😉 So here’s an alternative but not-so-interesting piccy instead, x

Of course it’s been so long now that I’ve since graded again in adaptive Kung Fu. I am now the proud, and rather gobsmacked, owner of a blue sash! 🙂 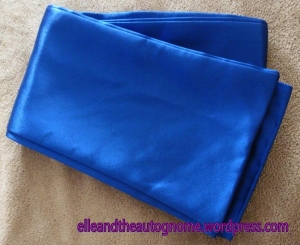 None of these achievements were things I aimed to attain. It’s all been a case of trying things because I want to, let’s face it… doing a physio’ that we actually enjoy or which makes us feel good about what we’ve achieved is well worth the effort just for that, let alone all the physical good that we do it for. And yes, don’t get me started on the extended Aftermath Pain from attending the tournaments! But it’s worth it. For kicking the arse of my health conditions… it’s so worth it!

I do push myself, but I do it within the knowledge of how to work pain management activity balanced with rest and recovery. Plus I pay attention to the feedback from my body and work from the adaptive point of view to keep me from plunging into any unnecessary mega-flares. That is where the ‘adaptive’ aspect is really important. There’s no sense in comparing myself with healthy classmates, I do what I can for my body and for my inner self.

Of course mega-flares are part and parcel of competing twice a year and whenever I dare to grade, but the psychological boost I gain from feeling like I’ve just stuck my fingers up and my tongue out at my health issues helps to get me through the flare,  which is finite, whereas the achievement will be with me for life.

Ah yes, I love Tai Chi!
I’ll be practicing it to whatever capacity I can, including (especially) when I’m crinkly and weathered! (I was gonna say “until I’m crinkly and ricketty” but I’m already sooo ricketty it didn’t really work, heh!)

I am amazed and so pleased that I have the chance to adapt the Kung Fu around my issues, and if I never get further than the blue sash I’ll still be thrilled. 🙂

What do you think of this post? Elle and the Auto Gnome welcome feedback, x Cancel reply